Attention Residents Fishing Pier and Walkway are Closed Until Further Notice Read On...

Your Town Historian, Rick Reynolds, has a multitude of tasks designed to help the Town remember and celebrate its past.

One of the primary responsibilities of the Town Historian is to interpret the past of the local area. Using town records, photographs, drawings, and the townspeople themselves, the Historian presents programs of interest and works with teachers in local schools to enhance the teaching of local history.

In addition, the Historian is involved in research and writing, both in an attempt to preserve the memories and ideas of the past. Sometimes this may involve leading amateur genealogists towards resources that may help them locate their ancestors. Other times, it is so that the community will have well documented records to which to refer in future years.

The Historian is also becoming increasingly more involved in historic preservation in the community. This can involve cataloging and appropriately preserving collections of original town records or can be as large as preserving houses and other buildings that have played a major role in the community.

Advocacy and organization are the last basic roles of the Town Historian. He or she plans celebrations and remembrances to commemorate local events of importance. The Historian may also be involved in lobbying activities at the state and federal level.

All of this is designed to do what is most important to all of us: help the people of the town remember and celebrate its past and, at the same time, prepare the present to be someday remembered as the past as well.

For further information, stories of our Town, or to schedule a presentation, please contact Rick Reynolds.

Town of Ballston Historian Rick Reynolds now has a channel on YouTube, called "Ballston The Historian's Perspective". Subscribe to the Historian's YouTube channel while you are there, too! More videos to come in the future. Enjoy!

Check out the new video on the Town Historian's YouTube channel - School Days, School Days: Reminiscing about Schools in the Burnt Hills-Ballston Lake Region of Upstate NY. It is full of anecdotal stories about one room schoolhouses and the schools of the BHBL School District.

The house that became known as Hawkwood was probably built in the late 1700’s by Henry Walton who “bucked the trend” of the rich and famous who were all buying land in Saratoga.  He, instead, decided to build his house in Ballston.

The house was purchased by Edward Delevan in the 1830s and became known as the Delevan Farm.  The Delevan family was a wealthy Albany family who probably owned slaves.  To this day, there is a Delevan Creek in the area of the old Delevan property.

In the 1880’s, the Baker family, led by wealthy brother Guy, purchased the Delevan estate, which encompassed many acres from current day Route 50 just north of the Burnt Hills intersection all the way to the shores of Ballston Lake.  They renamed the mansion which sat upon the property, “Hawkwood.”  The Baker brothers later built a house on Ballston Lake so that William Bliss Baker, a famous painter of the time, could have a studio in which to work.  That building was and still is known as “The Castle.”

It was the Bakers about whom we know the most.  Guy Ellis Baker’s marriage to Louise Irene Palma Di Cesnola on December 28, 1904 was reported in the New York Herald on the subsequent day.  That wedding as well as many visits and social events which involved the couple were published in many other newspapers and on many dates in later years.  Her father, who was of Italian heritage, was a Civil War veteran and a winner of the Medal of Honor.  After the war, he became US consul to Cyprus and, for 25 years, he was the director of the Metropolitan Museum of Art. In 1873, the museum was even expanded to accommodate his extensive collection of antiques.

Hawkwood, where the newly married couple lived was described in the New York Herald as “a fine estate.”   The mansion’s entry/receiving hall was 20 by 30, big enough for balls and concerts.  It had textured crimson wallpaper throughout.  The dining room had mahogany furniture; the bedrooms, canopied beds, one a Victorian sleigh bed.  The house contained four pianos, one a full grand and it had fireplaces in every room—11 total.  The walls were lined with brick for protection against stray bullets and arrows.   Up to 15 servants were needed to maintain the house.  Its outdoor three-seater privy even had plastered walls!

For its time, this house was quite significant.  It had pull chain toilets upstairs and was the first house in Ballston to have running water and gas lights (carbide and water produced the light).  Its outbuildings numbered at least five:  a “tenant house” for farm laborers, a creamery, an ice house, a hog house, and barns as well.

Teddy Roosevelt visited Hawkwood.  He came to go fox hunting in this area. To get to Ballston, he would come by railroad and then coach but, one time, the coach was so late that he decided to buy some ice cream. Because of his subsequent white mustache, many people in the area remarked about his unusually “white” mustache!  His daughter, Alice, came with him on another visit and fell into a watering trough on Midline Road!

Although the house burned down fifty some years ago, its importance is verified by its inclusion in the Library of Congress’ Historic American Buildings Survey.  Pictures of Hawkwood can be found on their website at <http://www.loc.gov/pictures/collection/hh/item/NY1108/>.  However, there are still remains of the house today on the property.  Still to be seen on site are the foundations of the mansion itself and its many outbuildings, as well as a few fireplaces. Some of those remains were studied in a 2016 community archeological dig at the site.

And it is this 246 acre property at the corner of Route 50 and Middleline Road, a property that now is owned by the town of Ballston.  It is included as part of Anchor Diamond Park, purchased through the generosity of Frank Schidzick in his will.  The property, with a conservation easement from Saratoga PLAN, is now a passive park for all of the town residents, a park with multiple trails and historic remains, open all year round. 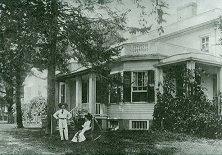 At a wonderful ceremony on Saturday, November 4, 2017, at Calvary Episcopal Church in Burnt Hills, the plaque designating the church as a new member of the National Register of Historic Places was unveiled and placed next to the entrance to the church. Thanks to the William G. Pomeroy Foundation for providing us the money to purchase the plaque for the building. 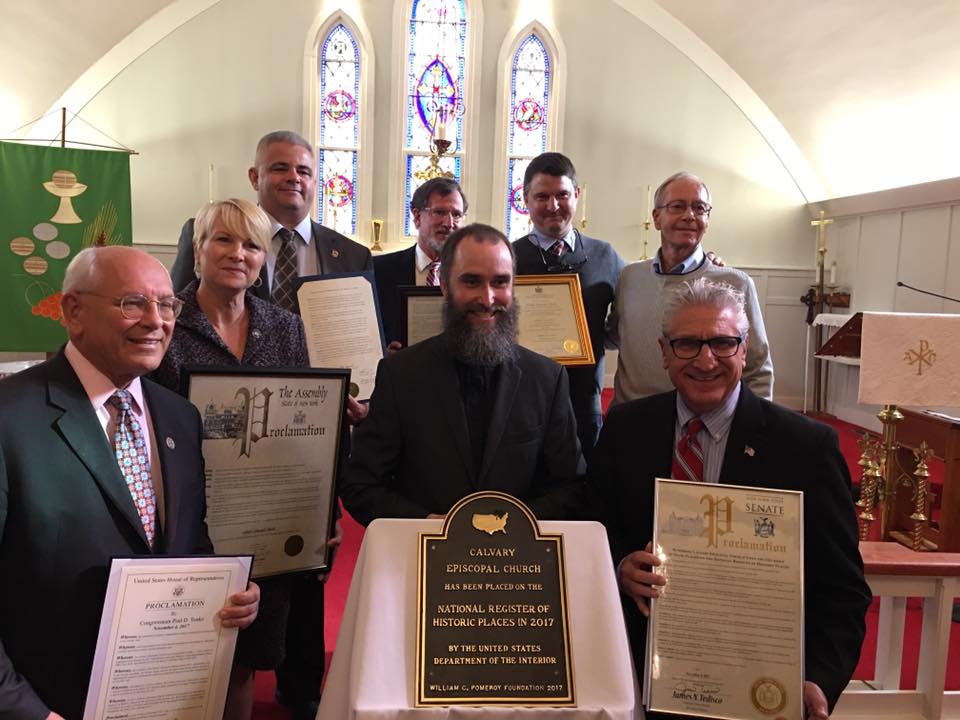 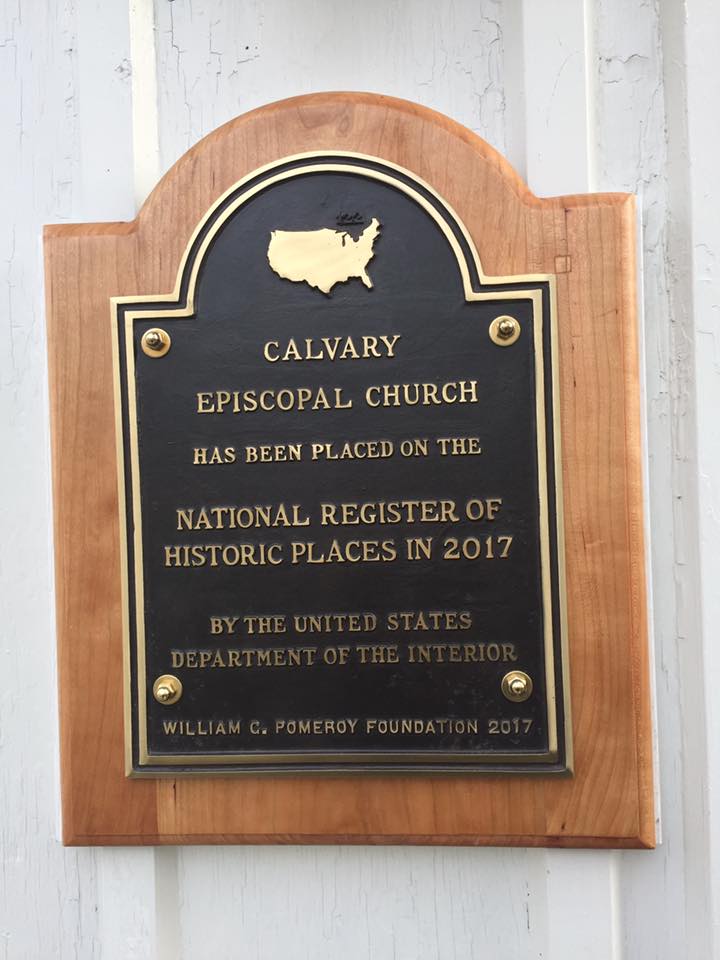 The original white settlers in the area we now call Ballston were the McDonald Brothers who came here in the 1760s. These brothers established a good relationship with the Indians who lived near the area and traded extensively with them. Those Indians sometimes would burn the surrounding hillsides so as to attract the deer who would come to eat the new shoots that would sprout up from the ground. Thus, the area became known as the land of the "burnt hills", a name we still use for the area. Some also say it was the settlers in Schenectady who looked up at these surrounding hills and, seeing them ablaze, named them the "burnt hills."

Reverend Eliphalet Ball came to the area we now call Ballston with a couple of dozen settlers in the 1770s. On September 22, 1775, Reverend Ball held the first "meeting" in his church which was near his home. He became a respected citizen of the area and political meetings of all sorts were held in his building which soon thereafter became known as the Old Red Meeting House. That building eventually became the first school in the area.

Reverend Ball knew the McDonald Brothers and the folklore goes that, one time when they all met, Ball offered the brothers a quantity of rum in exchange for the rights to call the area "Mr. Ball's Town". We do not know if this is true or not but eventually what was originally known as "Mr. Ball's Town" became Ballston, the name we use today.